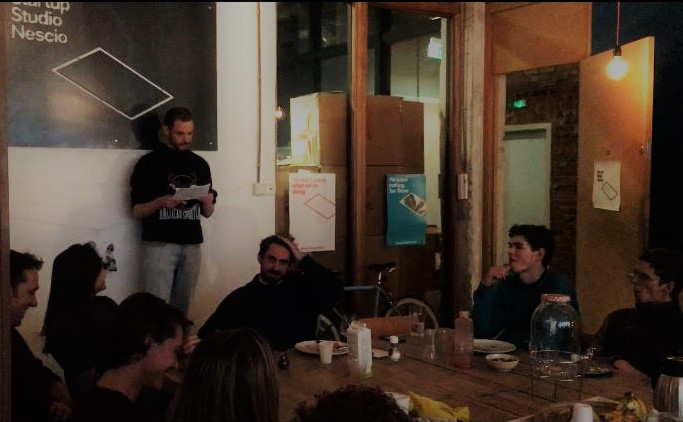 We will forever remember the day our four Management Toppers faced an onslaught of hidden, privately burning staff frustrations by way of an actual Sinterroast. This roast consisted of several finely edited and poetically formulated truths and observations written by the Nescio-staff. The level of roasting surpassed the expectations (although depending how you look at it, in terms of its high quality but low roasting). Our MT proved themselves worthy of the challenge and stood proudly against the roasting, thus (re-)earning the never-ending respect of the staff.

A fine example by one of our (apparently also) poetically inclined coders:
– Roses are red, violets are blue,
your coat doesn’t look as tsarly as you intended it to.
To me this terrible fashion choice doesn’t come out of the blue,
since I never had a boss more crazy than you.
For instance last team outing: you drank all the night through,
while probably you should’ve stopped after a beer or two.
You ended up trying to order an Uber, but even you knew,
with so many beers it was impossible for you to do.
So you yelled and waved in front of a tram without having a clue,
why the hell the tram driver was looking annoyed towards you.
But I bet there are good things about you too,
I just couldn’t think of one, it’s true. –

Further examples might not be furtive in sketching a positive image of our company and will only be remembered on the corporate harddrive and our everlasting memory. The two hours of pure joy and accompanying tears were a perfect way to close the year and start the next anew with a clean slate!

Thank you Team Nescio, for your amazing contributions, best efforts and joyful company!

P.S. Never one to back down of a creative challenge, Stef showed that a roast can work two ways. He forced his way onto the (slightly improvised) stage to eloquently deliver his re-roast of the staff, earning the ‘Most Roasting of all Roasts’-prize and getting to take home his Christmas-roast; a fireplace log.

Team Nescio came, saw and conquered at the Mudmasters Run